Pull your socks up, McKee! 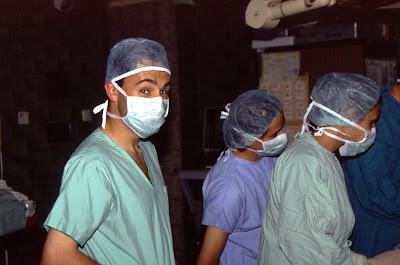 [I'm retroblogging my medical elective in Nazareth EMMS Hospital, Israel, in 1993. In November 2009 I am joining the Nazareth Bike Ride from Amman in Jordan to Nazareth, to raise much-needed funds for the hospital. Please sponsor me, and follow my training progress on Twitter!]

I was very shy and retiring (and lazy?) then, and tried to glean what I could from the patient notes. Although the official record-keeping of the hospital was in English, a lot of the A&E records (and much of the inter-doctor discussion) were in Hebrew or Arabic - and all the patients spoke Arabic. I had very little Arabic apart from "nafas!" ("breathe!" - I hope), which was of limited value, since most patients knew to do this anyway, and when they stopped, that was a problem that was unlikely to be resolved by simple commands, in whatever language.

Looking back on it, I'm acutely aware (and embarrassed) of how wet behind the ears I was, and I suspect I was perhaps less than effective or enthusiastic about the medical aspects of my visit. But then that could just be the lapse of time. Maybe everyone feels this about their elective.
Posted by Shane at 21:37