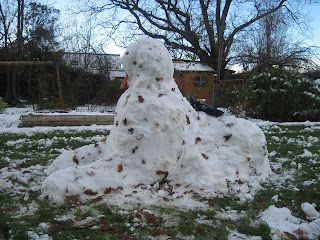 Religion is a funny thing. Over 5000 years ago, long before Yahweh was invented, the people of Egypt developed a sophisticated (and oft-misunderstood) religious system that lasted far longer than Christianity, yet vanished without a trace.
Yes, elements of Egyptian religion became incorporated into the new religion of Christianity (the Trinity is one example; much of the Gnosticism that ended up making its way into *mainstream* Christianity is also traceable to concepts directly related to the old Egyptian religion), but by and large it was forgotten.

At Christmas time, let's celebrate what came before. Let's raise a toast to the Egyptians, and make our snow-sphinxes (weather permitting) with pride.
Posted by Shane at 16:19