I have been a bit remiss in uploading the full data from our Jordanian/Israeli bike ride. Here is some of the juicy stuff. First off, the ride from Madaba in Jordan down to the Dead Sea. 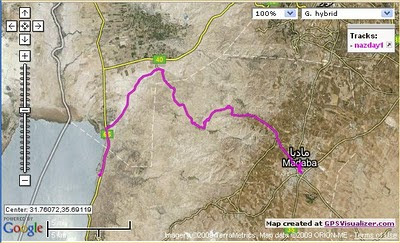 The Dead Sea is of course the body of water at the bottom left. Here is the elevation profile. 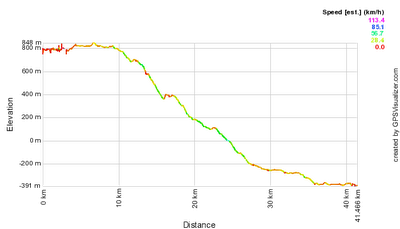 As you can see, it was mostly downhill - quite a LOT of downhill! Having said that, much of it was in the teeth of a pretty strong headwind, so it wasn't quite the exhilarating free-wheel it looks from the profile. Still, a lot of fun.

We had spent the morning at St George's Monastery in Madaba, looking at the fine mosaics, and were itching to hit the road, so although it was a short cycle, we felt well justified by the time we reached the Dead Sea.
Posted by Shane at 21:52