It's arrived! "Should Christians Embrace Evolution?" 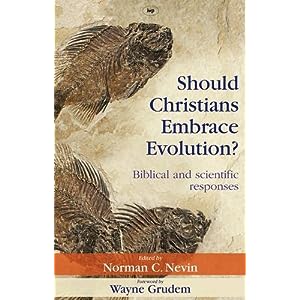 Amazon have finally delivered this book that I am itching to review. It is published by Inter-Varsity Press as a compilation of articles written by creationists specifically for this collection, but (oddly) with copyright held by the individuals themselves.

Essentially it is a multi=pronged hatchet job on Dr Denis Alexander's "Creation or Evolution - Do We Have to Choose?". In Alexander's book (which I have not read fully), it is argued that creationism is based on flawed science and flawed theology - the former I agree with; the latter is debatable only in the sense that all theology is flawed, theology being a discipline that starts off with a massively improbable and unprovable premise, and goes downhill from there. Alexander argues that science is at least compatible with Christianity - a point that is accepted by the large majority of Christian commentators.

But not by a small rump of die-hard science deniers who have managed to set up a reasonably successful stall for their patent snake oil within the evangelical Protestant Christian sector. Evolutionary science has been under attack from religiously-motivated creationists since the publication of "On the Origin of Species" in 1859, and despite the fact that every creationist objection has been blasted out of the water, still the perky little gadflies pop up and fire off another round of nonsense. The most recent effort in this arena has been "Intelligent Design", a propaganda (for there is precious little science or theory) effort by the Seattle based creationist outfit "The Discovery Institute" to force the non-sequitur, "life is really complex, therefore god did it". These attacks have possessed all of the breathtaking inanity (to quote Judge Jones's perfect phrase) of olde tyme creationism, but without specifically pegging their pitch to a 6000-year-old Earth.

So, to some extent, "Should Christians Embrace Evolution?" is a refreshing return to form by the creationists - unashamedly simplistic in its naive analysis of the biblical texts and unashamedly young-earth literalist in its overall perspective, it's like stepping back in time about 200 years to the fire'n'brimstone, or teleporting to Ken Ham's Creation "Museum" outside Cincinatti.

Anyway, I have so far only read a few chapters, and so far the scholarship is very weak, the attacks on the scientific picture of origins are misguided, and the pretence at analysis paper-thin. Over the next few weeks I will review the chapters of this book from the perspective of science. I will also comment where appropriate on some of the wilder theological statements that crop up from time to time. Before that, perhaps a little quote from Chapter 1 (Alistair Donald) is in order: "a commitment to the supremacy of Scripture [sic] will not allow the embracing of any aspect of evolution that compromises the key themes of the biblical text."

There. You know the score. Stay tuned for more laughs...
Posted by Shane at 21:28