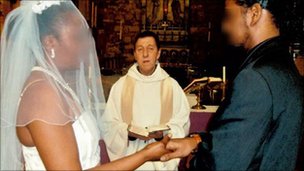 A vicar has been found guilty of conducting sham marriages to attempt to bypass immigration laws.

Giving evidence, [Father Alex] Brown insisted he only ever married couples he was sure were together for the right reasons and said he only made exceptions if the bride-to-be was about to give birth.

Archdeacon of Hastings and Lewes, the Venerable Philip Jones, said it was a very unusual case

He admitted he occasionally forgot to check passports of foreign nationals and said he became suspicious of one or two couples, but only because of the vast differences in age between bride and groom.

360 of them to be precise. In FOUR YEARS. Busy little beaver.

I admit to having something of a soft spot for the Anglican church. They are not as nutty (usually) as the Calvinist brigade. But it is appalling that people within such an organisation can maliciously warp and abuse the law of the land for their personal gain, defrauding and manipulating people in the process. But maybe that's par for the course...
Posted by Shane at 21:22