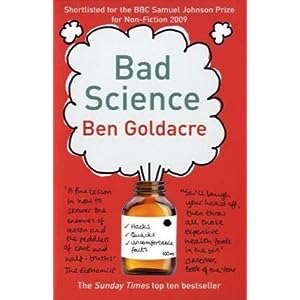 But not today. Today I would like to draw the attention of whatever readers manage to dodge the tumbleweed and jangle their spurs down the dusty main street of this ornery ghost town to the supremely brilliant book "Bad Science" by the fantastic Dr Ben Goldacre. In a joyous, but nonetheless rigorous and meticulously researched, romp through the world of alternative medicine and similar pseudoscientific nonsense, Ben comprehensively debunks the likes of "Dr" Gillian McKeith, the former darling of the stool-gazing media, whose qualifications and claims do not stand up to the remotest scrutiny. That should be enough in and of itself, but no. There's more.

Demolishing the bogus claims of outright quackery like homeopathy and Andrew Wakefield's atrocious MMR vaccine hoax, Ben cuts like a knife through rancid butter. But it is not just a debunking mission - along the way you learn about things like the placebo effect (profoundly misunderstood by the public), regression to the mean, and other sources of bias that scientists are very much aware of, but charlatans love to use to con the public.

This is one of those books where you come out the other end *smarter* than when you started - and that is always a good thing. I can't recommend it highly enough.
Posted by Shane at 20:48