Farewell to a legend 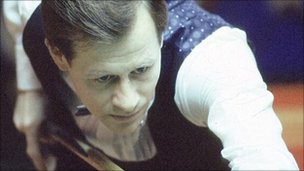 Today Belfast said goodbye to Alex Higgins, arguably the man most responsible for making the otherwise incredibly boring game of snooker one of the most popular spectator sports of the late 70s and early 80s. I know it's a cliché to say that you remember him winning the 1982 World Title, but pretty much everyone *did* watch that final, and it was a pretty big deal.

However, after the Hurricane's departure, Belfast needs to ask itself some searching questions - like why is it that our main reputation is for violence, and our most prominent sporting heroes were a little too fond of the sauce or the fags, and ended up dying too young?

I would hope that at least some of the legacy of Alex Higgins and George Best would be to make youngsters think: "I wish I could be like them, *except* for the booze and the fags. And perhaps with a little better control of my temper." But then perhaps the excess is what made them what they were. And then one also has to wonder about the whole Augustinian nonsense of original sin. If there really *is* a god (a quaint notion which I suggest has the most minuscule probability attached), would he *really* want to fill heaven with sycophantic harpists, theological drivel-merchants, sunday school teachers and the like? Or would he rather have a smattering of folks who would from time to time head-butt Gabriel or smash their Ferrari into the Pearly Gates?
Posted by Shane at 21:15