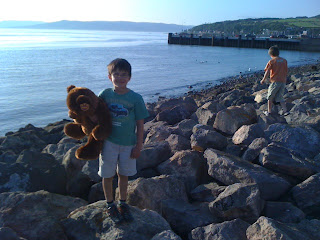 So number 2 son pesters dad to go into the amusements at Largs. Goes to the claw-grab-soft-toy machine. Sticks in his pound. Bam Bam- machine grabs him a big teddy first go. AND refunds his pound! What are the odds?
Posted by Shane at 19:01 0 comments

This does not work as an iPhone signal booster 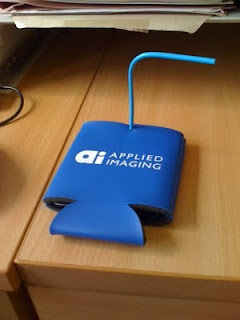 But as it is made with a can-holder, a jumbo paperclip and some blue plastic sheathing, that should not be a surprise. So it is now in the bin. And my office is still something of a not-spot :-(
Posted by Shane at 21:09 0 comments 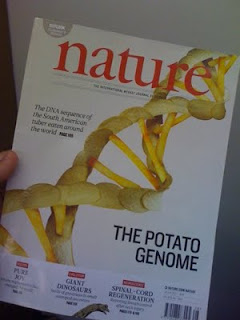 On the Historicity of Goldilocks and the Three Bears Since the advent of trendy theology in the 19th century, it has become fashionable to regard the Goldilocks narrative as just a story - that it didn't really happen. Nowadays many Christians even dismiss it as a myth, yet they still call themselves Christians. This is an appalling state of affairs, and it is even more tragic that few of the major Christian apologists have tackled this issue head-on. It is time to set the record straight, and affirm the historical Truth of the Goldilocks narrative. I intend to show that it is overwhelmingly more likely that the Goldilocks story is literally true than not, and not only does it constitute Warranted True Belief, it is *necessarily* true in a deep ontological and cosmological sense, i.e. if the G3B model was any different, our universe would be deeply inimical to human life, and we would not even be here.

Firstly, we must look to the person of Goldilocks herself. In the sacred texts she is described as a young human female with long golden locks of hair. Females make up half of the population (approximately). We can estimate that her age was between 8 and 12 years. Only about one in eighteen people fall into that category. She is human - the vast majority of creatures on this planet are non-human (including the three bears who are central to this incident), so even giving this a 1/1000 probability is probably being generous. Only about a quarter of Northern Europeans are sufficiently fair-haired to be called "goldie", and even some of these are bald, but Northern Europeans only represent about 10% of the Earth's population.

So we can see that in putting these parameters together, we have an overall probability of less than ONE IN A MILLION that Goldilocks would meet the criteria that we already KNOW she fulfilled!
Those who would deny the story therefore start off in the very difficult position of explaining away this highly accurate Swinburnian analysis of the data. Some commentators have called this "The Rare Goldilocks Hypothesis" (RGH).

We then come to the issue of the Three Bears. Note that the parameters are incredibly fine tuned. If there had been only 2.99999999999999999999999 bears, the story would not work at all. To dismiss the fact that there were THREE bears as "just a coincidence" or "due to chance" is frankly ridiculous. Clearly this has been intelligently designed, and the correspondence is massive evidence in favour of this story representing a real historical incident. Further evidence for fine tuning comes from the fact that there were THREE bowls of porridge, THREE chairs, THREE beds - all these parameters had to match PRECISELY.

The three bears went for a walk IN THE WOODS - again, this is EXACTLY what we know bears do (they do other things in the woods too). Yet this story was written down by simple Galilean fishermen who knew plenty about fish, but not so much about bears. But they could write with the authority of a PhD in Ursology from the University of British Colombia. Powerful evidence that the G3B assertions are FACT.
Let us now look at the porridge. Nutritional scientists with PhDs that they haven't made up or bought off the back of a Special K packet have confirmed in numerous sciency studies that porridge contains the PRECISE balance of whole grain and yummy oaty goodness to set a bear up for the day, at least until he or she catches a big salmon or a deer or something more appropriate to its carnivorous physiology. Chance? I don't think so, and therefore neither should you.

We also note some charming aspects of the story which help to confirm its authenticity. Despite the size ranking of the bears - large, middle-sized and small, it is the *small* bear's parameter set which most closely match the pre-existing preferences of the blonde female humanoid juvenile. But they don't just closely match - they are JUST RIGHT - again, phenomenal fine-tuning, demanding both the presence of an intelligent designer, and supporting the essential historicity of the G3B framework.

There are many more pieces of supporting evidence that could be brought to bear (yes, I know), but perhaps the most incontrovertible, the most poignant, the most devastating is the eyewitness testimony of Goldilocks herself, as she ran screaming from the bears' house, fully conscious of her sinful state. Yes, dear friends, the realisation of her Fallen status was brought home to her by *bears*. For all have eaten porridge, broken chairs, slept in beds, and fall short of the glory of God.

If you do the statistics on all this, as has been done by such creative mathematicians as Alvin Swinburne and Richard Plantinga, you will find that the probability that all this could be due to chance is just one part in a zillion bagillion, and even Professor Brian Cox (noted atheist, physicist and keyboardist with indie pop quartet sensation "Papa Higgs and his Crayzee Boson") remarked: "It's really vast!"

So let us not forget what we learn from Goldilocks in this True and Valid account. After all, what would she gain by lying? Would she go to a horrible death for a *lie*? It is such an incredible story, it HAS to be True.

And if you don't believe it, you'll go to hell for all eternity.

[I should also point out that the Holy Trinity of the Daddy Bear, Baby Bear and Mummy Bear bears (again) an uncanny similarity to the Father, Son and Holy Spirit - yet more evidence.]
Posted by Shane at 22:08 61 comments

Email ThisBlogThis!Share to TwitterShare to FacebookShare to Pinterest
Categories: Goldilocks

Our future in space?

When the touchdown of the Space Shuttle Atlantis, STS135, brings an era of human spaceflight to a close, it'll be a somewhat sad day. In many ways the Shuttle has been a marvel of technology and has opened up new vistas on the entire Universe, not just the low earth orbital realm inhabited by the International Space Station. Shuttle has launched some of our most important orbital science platforms, including the Hubble Space Telescope, arguably one of the most productive science machines ever implemented.
But now it is coming to an end - hopefully in a whimper. Where do we go from here? I was only a fetus when Armstrong and Aldrin landed on the Moon, and as a kid I thought we would at least be at Mars by now. I was reading Asimov & Clarke before Janet & John.
Does the decommissioning of the Shuttle fleet mean a step backwards in our exploitation of space, as  the cancelling of Apollo meant a very real retreat from the Moon? Or does clearing  the deck of a programme whose expiry date has come mean that the field is now clearer for development of smarter and cheaper ways of getting humans into orbit and beyond?
Part of me would have liked to have seen Atlantis stay docked long-term at the ISS, and the crew come down on a Soyuz. Prep the old girl in orbit for attachment to some boosters for a mission to Mars. Sure, that's nonsensical - it is not the vehicle for such a mission, but it would be a nice thought to have a jalopy parked in the yard for some spins around the block and further afield.
As it is, I firmly believe that we need to get back into space in a major way, both to protect our place on our own planet, and establish ourselves on others. We need to develop the technologies for living and working away from Earth, as well as reversing the cynicism that has set in since kids started reading Harry Potter instead of 2001 - A Space Odyssey.
Posted by Shane at 20:45 1 comments

Email ThisBlogThis!Share to TwitterShare to FacebookShare to Pinterest
Categories: space

Is this elevator going anywhere?

#Elevatorgate is all the rage in the #atheist twittersphere at the moment. In what has to be seen as a rather crass and uncharacteristically hurtful post, Richard Dawkins (a man whom I hold in rather high regard, actually) wrote a very disparaging and frankly sexist and dismissive set of comments in response to Rebecca Watson's perfectly sensible and reasonable post dealing with the fact that she dislikes being propositioned in an elevator (that's a "lift" for those of us in the UK).
Now it seems things have got a bit out of hand, and I think everyone should just step back a bit and calm the heck down. Richard, please read over the comments you have received, and apologise. It's not that you are wrong in that the injustices and abuse that many women have to suffer are far worse than being propositioned in an elevator - they are. It is that your post was dismissive of a problem that is real and distressing - and *dangerous* - in our current cozy Western society. And that is the objectification of women. The notion that treating them as sex objects is OK, and they don't have a right to be upset about it. The bottom line is that religious thoughtlessness cannot reasonably be condemned for the same sorts of lapses that we perpetrate ourselves. If we are criticising others for their unacceptable behaviour, we need to recognise it in ourselves. Sometimes it needs to be pointed out to us, but when it is, we have to be gracious enough to accept it when it's correct, suck it up, apologise and move on.