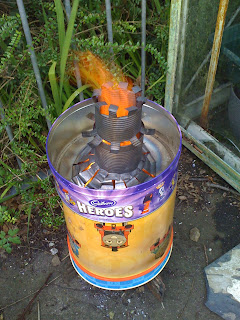 So I took my abortive previous design and stuck it on top of my trusty Thomas TLUD - it now acts as a combination concentrator and wind-guard! Even though it's blowing pretty hard today, the trusty little stove was quite happy. As aficionados know, it's all about air flow. Next step will be to integrate these lessons into a unified ab initio design.
Posted by Shane at 19:33 0 comments 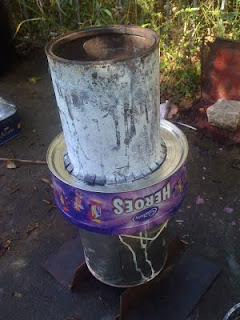 Hmmm. My new "Hero" TLUD doesn't seem to work very well. I think I need to throttle the pyrolysis/combustion interface a bit more. May be a problem with the feedstock though. More later...
Posted by Shane at 07:15 0 comments 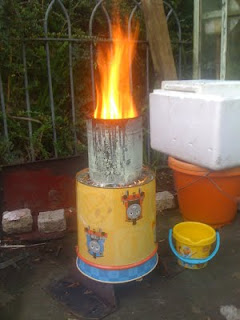 Meet Thomas the TLUD - top-lit up-draught stove. This one is made from a 5L paint tin pyrolysis chamber inside, an old wastebin on the outside, and a 3L paint tin chimney/combustion chamber. And it goes like the clappers! 4L of wood chips gives a beautiful 20min burn that provides stacks of heat and generates about a litre of charcoal. I'll run some more tests and get some proper figures on this.

Suffice it to say that the TLUD is the way of the future. Forget braziers and patio heaters - this is hot hot heat from fully renewable sources. 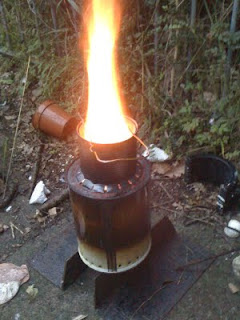 There is something almost mystical and *alive* about a little TLUD happily burning wood gas and generating charcoal. Look how happy the little chap is! See his jolly flame leap into the air! This is the world of the top-lit up-draught stove, or TLUD.

I made this wee beauty from an old paint tin, a tin of dried baby milk and a tin of pineapple chunks. Additional equipment: a hammer, nail, old scissors, tin-opener and pliers.

The principle of the TLUD is simple - burn the gas, not the wood. As wood is heated it gives off various gases in a process known as pyrolysis. Usually these rapidly combine with oxygen resulting in a relatively inefficient local burn, but if you heat the wood in the relative absence of oxygen, the gases can be channelled for secondary combustion. The result is a very clean, efficient burn that delivers most of the wood's energy to the gas flame. If used for cooking, it is many times more efficient than an open fire. You need a lot less fuel, and you generate a lot less smoke. The applications for the developing world are obvious. Since it generates charcoal, you can bury this as biochar, making the process carbon negative - ie you are effectively removing carbon from the atmosphere.

So spread the TLUD gospel! Get out and make your own! Experiment with different designs and tweaks.

There has been a huge amount of drivel written and spoken about the
recent riots in England (funny - they are calling them "UK Riots" now,
but Scotland, Wales and Northern Ireland seem miraculously spared).
It's all supposed to be down to this government or that government or
social inequality or absent fathers or police brutality or base
criminality or some such horseshit. Don't get me wrong - some of those
may be enabling factors that need addressed, but focusing on these
issues alone is missing the elephant in the room. That elephant is the
behaviour of people when they are in groups.

In the BBC documentary series "The Code", presented by Marcus du
Sautoy (sorry for the earlier twitterification of everything, but you
may want to follow Marcus!), there is a really fascinating sequence
involving starling flocks in Denmark. This enormous flock of birds
behaves almost as a single vast organism, and you'd think it needs a
vast controlling intelligence to make it move. However, the rules
governing the behaviour of a flock are surprisingly simple - indeed
spectacularly so. All each individual starling needs to do is keep an
eye on it seven nearest neighbours, and match what they do - speed,
direction, etc, and avoid predators. The behaviour of the huge group
emerges from those simple rules - complexity emerging from deep
simplicity. It turns out that humans are really no different - our
incredibly complex behaviour is the result of very simple rules.

So how do we apply this to the utter arsebiscuits that went on in
London? Is it a disaffected generation venting its social isolation,
or is it something a lot more simple than that? Is the looting and
rioting any different *really* to the banking crisis or MPs' expenses?
I would suggest that they are all *precisely* the same phenomenon.
Here's why. A store gets broken into. Some people (Bad People) start
taking things from the store. Other people see this and think: hey,
it's unfair that they should be able to get stuff that I can't. I'll
go and take something too. Someone else sees this, and breaks into
another store for the same reason, and so on and so forth. It is the
perception that members of your peer group are getting things that
you're not. You feel disadvantaged, not because of social ills, but
merely due to the fact that by holding back, you're missing an
opportunity. So you join in the group behaviour. No complex
co-ordination - just group behaviour. Morality, after all, is a social
contract, and if you feel that the rules have shifted (rightly or
wrongly), you are more likely to join in the "new" rules, rather than
stand back and take a good look.

And in the midst of all this, this is the realisation that society
needs to deal with. In crowds, people can do astonishingly stupid and
immoral things. If we want to prevent rioting and looting, we need to
acknowledge this, and develop strategies for applying it, instead of
wringing our hands and indulging in the sort of self-righteous
angstgasms that have coruscaded over the media and Twitter the last
few days.

I have a few more photos of my Top-Lit Up-Draught stove on Twitter - just follow @shanemuk if you don't already. I'll get them up on the blog when I get some time.

Several people have commented that much cooking in the Developing World is done on open fires or in environments that are not exactly efficient or healthy; fires produce lots of smoke, require lots of energy, resulting in respiratory diseases, fires themselves, and environmental damage. If families could be shown how to construct spectacularly cheap TLUDs and use these instead, the environmental impact could be enormous. AND since a TLUD produces charcoal as a by-product, this could also be used either as biochar to enhance crop yields and sequester carbon, or even as a fuel in charcoal-fed appliances (of which there are also numerous).

So all of you outdoorsy types - become a TLUDdite - develop your own TLUDs and share the designs. I'll post mine soon when I've finished drawing up my retrospective blueprints...

Email ThisBlogThis!Share to TwitterShare to FacebookShare to Pinterest
Categories: TLUD 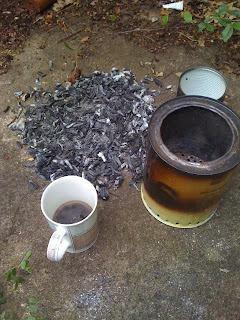 Thanks to my wonderful #TLUD. The black stuff is biochar - carbon that can be buried and is now out of the atmosphere. The fuel was wood chippings from pruning round the garden. Dried, of course.
Posted by Shane at 10:27 0 comments

Yes yes yes, I know I have been indulging my #Maker side (check out the hast tags - this gets fed to Twitter!) and neglecting really important things such as the complete gobbledegook that gets spouted by apologists over the alleged resurrection of Jesus. Now I have to admit that I am something of a fan of Jesus - I think he was on to something before it all went pear-shaped for the poor bloke. Not that we can trust the gospels especially - not a single gospel was written by a witness to any of the events, and the three earliest are actually largely based on the same documentary sources, so there are really only three gospels. Confused yet? Well, a useful trick (if you're interested in real history like I am; if you're just here for "belief" then you can scroll to the bottom) is to take a pair of scissors and six bibles, and chop up Matthew, Mark and Luke, and align the texts together. Six because you have the forward and reverse of each page (recto and verso as we papyrologists like to say). Alternatively, copy and paste the text in a three-column WP page.

Anyway, what you will find is that the authors of Matthew and Luke did pretty much the same thing - they borrowed very very extensively from Mark. And this is one reason why we can be very sure that they based their documents on documents, not on eyewitness accounts. And it also makes the discrepancies very very interesting. Not because they are discrepancies per se, but because of the spin the different authors put on the stories to advance their own personal agendas. Not the agenda of Jesus, but the agenda of "Matthew" and the agenda of Luke.

Try it - have a really good look at the different stories around the resurrection in particular. If you are interested in actual history, it's well worth it. And don't bother going near the apologetic rubbish that seeks to harmonise the stories. That's just lame. 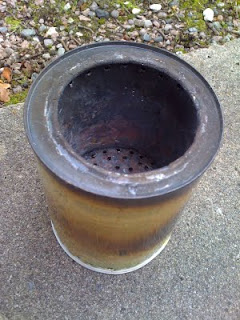 Meet my home-made gasifying wood stove, made from a couple of old paint cans! Burns wood chips like a beauty, creating charcoal in the process. Enough heat output from one fill of wood chips to boil a litre of water, and very efficient. I'll be experimenting with other designs in preparation for the coming collapse of civilisation...
Posted by Shane at 15:18 0 comments