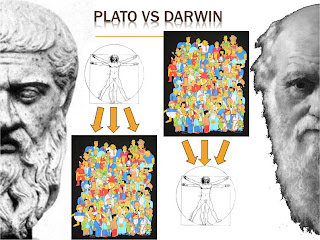 Much as I like Plato, and indeed subscribe to a certain neoplatonic mathematical notion of the origin of the universe, he got some things badly wrong, and it's a mistake that many people continue to make today. Indeed, it is an error that I frequently encounter among my philosophy pals, so perhaps I'm going to get it in the neck, similar to the umbrage that I playfully engendered with my "Show me the Sausages" post.
Or perhaps not. After all, most *real* philosophers are relatively sensible people.
Anyway, what is Plato's error? You may recall that Plato had a notion that somewhere in some eponymous platonic realm, there is the definition of the perfect "thing", e.g. the definitional chicken. This is the model example of what a chicken should be, and all chickens express this inherent "chickenness", but since they do this in the real world (where things are mucky), they do so imperfectly. So variation results from variable imperfections in the manifestation of this chickenness.
However, we now know (and Darwin blew this out of the water in "Origin") that there's not a perfect notional chicken - instead, what we do is take a population of organisms (and this works for humans too, of course), notice that they share several features in common, we throw a line around them to show that they belong to a meaningful grouping, and we attach a name to that group.
What this means is that our perfect chicken comes *after* the group of real chickens; we use real chickens to notice the things that distinguish chickens from guinea fowl, for example. But there is no inherent "chickenness" that has to be expressed by our firmly-classified bird.
It's the same for humans. Real humans are not variable manifestations of the perfect Vitruvian man (or woman), but organisms that form a recognisable biological group, so we call that group "human" and use the essential characteristics to work back to certain features we all share in common. The Vitruvian man is therefore a kind of idealised average, not a blueprint.
So the next time you find yourself thinking platonically, catch yourself on and try to think like a Darwinian.
Posted by Shane at 13:33