Alternative Medicine that WORKS - Taking WCTB Therapy into the mainstream

We know that Homeopathy works no better than placebo. We know that for many people a placebo effect can be helpful. Crazily, and completely counter-intuitively, we also know that placebo effects can persist, even when the patient KNOWS that what they are receiving is a placebo (Ben Goldacre has a great line in this stuff). Each year the NHS in the UK spends over TEN MILLION POUNDS on homeopathy - that very specific, very deceitful, entirely pointless placebo, when we know that a/ we don't need to lie to our patients to get a placebo effect (and homeopaths are either deluded or they do lie - we know there is no active principle involved in homeopathy), and b/ there are other forms of therapy that are *at least* as likely to engender a response as homeopathy, and indeed are likely to have a much greater and more beneficial long term response. The general population, gulled into shelling out their hard-earned cash, spend far far more - homeopathy is big business, and it's all wasted. Something needs to be done. Something CAN be done.

Ladies and gentlemen, after a very useful Twitter discussion with some learned colleagues (and helpfully storified and blogged by my inestimable colleague @anarchicteapot), I introduce WCTB Therapy.


What is this new miracle treatment? What portal to the fundamental life-force of the Universe has been opened to be accessible to mere mortals? How can these grandiose claims be made for a complementary medical therapy? And what IS WCTB? Let me explain.

Wee Cup of Tea and a Biscuit (WCTB):
It is our contention that many disease symptoms and psychological issues can be resolved by sitting the feck down with someone prepared to listen and to care, and to share a wee cup of tea and a biscuit. Our initial research suggests that the precise brand of tea and type of biscuit may not be terribly important (further research is needed). But after a programme of WCTB therapy, we feel (see the Twitter link above for my co-authors in this) that many patients will experience significant benefit in a wide range of acute and chronic disorders.
We do not propose WCTB as a cure for all ills, but there are very few conditions where WCTB is not likely to be a helpful adjunct, whether administered to the patient, or a worried relative. WCTB is cheap, requires minimal training to deliver, and, in fact, wonderful health practitioners and caring individuals in society have been delivering it for years with great effect.
Indeed, it is an indictment on our society that WCTB is not more widely available. If the government were to sink *half* the amount of money into WCTB that they flush down the drain in wasteful nonsense such as homeopathy, we predict that it would save the NHS vast sums of money - fewer complaints, more rapid recovery, greater community cohesion, improved mental health and general fitness - there is no downside.

So throw away those stupid homeopathy pills. Close down the various homeopathy hospitals and convert them into fully funded WCTB units where people can come in free for a regular dose of WCTB. Create WCTB Units in areas of social deprivation and unemployment, as well as major transport interchanges. Teach WCTB principles in schools and universities. Encourage people to offer their services as WCTB Therapists - all they need is a listening ear and a caring and compassionate nature. Stop wasting money on insane crap like homeopathy and Reiki and crystals etc.

And, you know what? We might just change the world.

@John_S_Wilkins (whom I respect a great deal) suggested I may have been shooting my mouth off a bit in abject ignorance in some of my recent Twitter attacks on the discipline of the Philosophy of Science. OK, he was a lot more subtle and polite than I've framed it. I confess - my knowledge of, and irritation at, the field does not stem from an in-depth analysis of what people have actually been writing (apart from reading a load of Popper in my tender years), but from various articles (pro and con) in the popular press, or opinion pieces in journals, or in media interviews etc. I may have been a little hasty.
Don't get me wrong - the way some philosophers like to classify everything into "isms" is really fecking irritating to a scientist or even a visual thinker, and leads to fallacies and boundary errors galore. Also, some people like Stevie Fuller or John McGrath, who pretend to be PhilsOfSci as a front to misrepresent and subtly attack science in the name of theism, give the field a bad name. In my line as a geneticist, it's creationists that I run across most frequently, so I'm perhaps guilty of tarring some very capable and wise thinkers with the same brush I use for outright loons.

Many great philosophers of science ARE or WERE great scientists, and many amazing scientists (Albert Einstein and Richard Feynman for example) have contributed a great deal to how we think about science and the scientific process.
So I have a contrite question: what should I be reading that will mend my view of the Philosophy of Science as the discipline currently stands? Am I focusing on bad apples? Is there such a thing as a good Philosopher of Science who has never been in the lab? Are there good apples? Give me some pointers, folks! 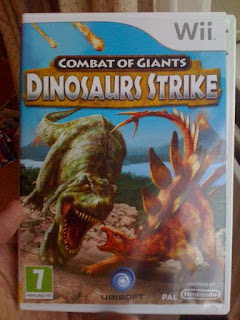 I get shedloads of guff wanting me to buy pipettes and lab reagents
and the like, but this is the best:

"SterilEnz® fittings are the only pre-gasketed and hermitically sealed
sanitary fittings designed specifically for single-use systems."

So now I have this mental image of hordes of little cave-dwelling
recluses pre-gasketing and sealing sanitary fittings, and it gives me
a warm glow in my heart and a potential consumer confidence that money
can't buy. I have no idea what the feck they're selling - I just know
that I *want some*... 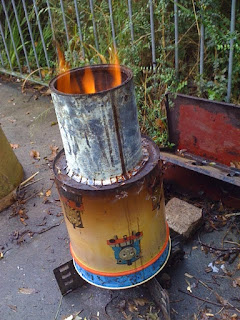 @bugsymckee, watch and learn! Fuel: woodchips (thanks, Bug!), some dried unstructured biomass beneath, top-lit for freshness.
Posted by Shane at 10:25 1 comments 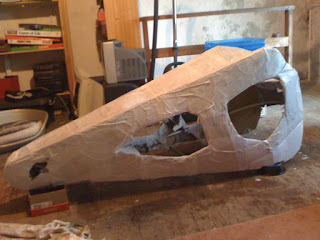 I've had to take some liberties with the anatomy for construction purposes, but with teeth and lower jaw, this will be scary!
Posted by Shane at 15:09 1 comments