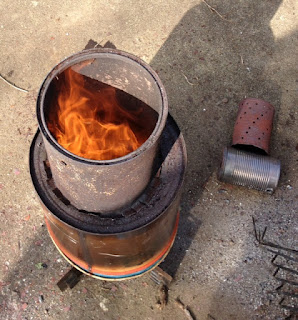 Breaking out the #biochar generator from its long winter hibernation, and the Beast roars back to life!
Posted by Shane at 14:16 0 comments

Iran and the Bomb

So Bibi Netanyahu is in the USA rattling sabres and scaring old ladies
about the prospect of Iran developing a nuclear weapon. He (and the
international community) regard this as potentially a Bad Thing. In
this he is not wrong. For what it's worth, many people regard Israel
having nuclear weapons as a Bad Thing - indeed, nuclear weapons in
general occupy a somewhat dubious ethical zone. But that's not the
debate I'm interested in. I would rather face a world in which a
nuclear conflagration in the Middle East is something that doesn't
happen.

But here is the deal. No matter what the USA and Israel do, the
Iranian nuclear programme is very likely to proceed. They have a
number of very capable scientists and engineers, and even if Israel or
America launch pre-emptive strikes, that is only likely to slow the
process to a point where it is resumed with heavily increased vigour -
ironically virtually assuring the outcome that Israel and the West
don't want. On the other hand, if no strikes are launched, progress
towards a weapon will continue. Damned if you do, damned if you don't.

So what is Bibi playing at, other than a fairly predictable rousing of
the usual rabble and trying to deflect worldwide attention from
ongoing illegal settlement expansion in Palestinian territory? Maybe
that's indeed all he is doing, aware that he can't change events,
whether Israel acts or not. However, perhaps it is time to make more
serious efforts to try a different way. The development of the Iranian
nuke is a given, if we continue in the current path. It is a product
of the ongoing enmity between Iran and the West. Maybe we need to be
exploring closer relations, finding a way to influence Iran from a
more friendly standpoint. Governments and Zeitgeists change; perhaps
it is not too late for Iran. Maybe they need a bit of space to move
back from the brink, but can't bear to lose face. Should we be
approaching them with softer overtures?

Or is this hopelessly naive? I suspect it probably is. In any event,
these are scary times in the Middle East, and the mood music is not
good. Comments welcome.

"We reviewed the evidence and there was no evidence for anything
between Torosaurus and Triceratops." -
http://www.bbc.co.uk/news/science-environment-17192624

Yes, I'm just kidding. I'm not turning into a fruitbat
"baraminologist". There is a new paper in the ongoing dispute between
paleontologists as to whether Triceratops, everyone's favourite horned
herbivore, was in fact a juvenile form of the slightly less well-known
but somewhat similar Torosaurus. Whatever, they are clearly very
closely evolutionarily related, like African & Indian elephants, or
humans & chimps. I can't really comment, but if Triceratops is baby,
daddy must have been a pretty intimidating critter. Pass the popcorn.