Nature can be cruel 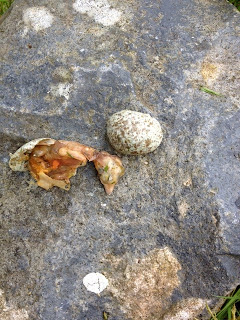 This little egg didn't make it.
Posted by Shane at 13:58 1 comments 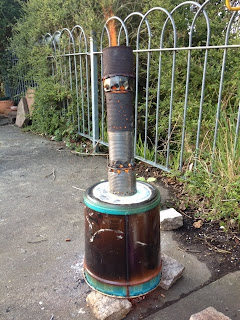 This little beauty just keeps giving! For passive TLUDs (top-lit up draught stoves with no fan for forced air) it really helps to have a nice long chimney. This gives the gases space to burn, and draws both primary and secondary air nicely through the apparatus.
Posted by Shane at 18:54 0 comments

I gave John Lennox’s previous book “God’s Undertaker” afairly positive review, because although he ultimately fails in his objective of showing that belief in the gods remains a respectable intellectual position, at least he made an effort in putting forth the very best arguments that theists had to offer in the Religion vs Atheism debate. In truth, the arguments were the best of a bad lot, so I was hoping that in “Gunning for God” Lennox would up his game a bit, and perhaps take things to a more interesting level.

Sadly, it seems there is no game to up. “Gunning” is a much worse book than “Undertaker” for a number of reasons. The declared objective is to take on the “Four Horsemen of New Atheism” as they have sometimes been called, and to provide an argument for Christianity. The “Four Horsemen” epithet gets Lennox in something of a comedy fluster; aware of the allusion in Revelation he priggishly fails to see the joke. Our doughty and doubty renegades are (or were, as one of their number is sadly no longer with us) Richard Dawkins, the late Christopher Hitchens, Dan Dennett and Sam Harris. In the middle of the last decade their books unleashed a publishing phenomenon that placed outright assertive atheism centre stage, and a slightly more conciliatory version on the sides of Britain’s buses. Lennox wants to shine up his Deputy’s badge and ride these varmints out of town.

Chapter 1 commences the embarrassment: apparently in order for “Naturalism” (by which he means the usual atheistic position that there is no supernatural realm beyond the universe, and what we have is all that there “is”) to work, we need to presuppose a god. I don’t propose to go over the many philosophical reasons why Lennox is talking nonsense here, and Lennox doesn’t address the arguments in any substantive fashion. Quotes from people he disagrees with (that’s our New Atheists of course) are generally very short, usually out of context, and there is no attempt to analyse their meaning. Often they are hopelessly inappropriate, for example (in a subsequent chapter) accusing Hitchens of being “foolish” for his flourish: “Our belief is not a belief. Our principles are not a faith.” The last refuge of the poor philosopher is always the Oxford English Dictionary, so off Lennox trots to try a little dance whereby the word “faith” ends up being the cornerstone of science. Sadly, all this involves is a crude sophist equivalent of the old ball-under-the-cups trick that’s not fooling anyone.

Chapters 2 and 3 are no better. Several of our Horsemen (and other commentators, whether they believe in the gods or not) have criticised religion on the basis of the many atrocities committed in its name. Rather than address this issue, Lennox tries on the old switcheroo, by trying to exonerate “true” religion and pin the blame on atheism. I have some sympathy for him in respect of some criticisms of religious violence being over the top, but he cannot deny that religion has been responsible for a great deal of evil in the world – heck, even Jesus said so. So what he does instead is claim that even when religious people carried out atrocities, “whatever these evil men were by label or background, they were atheists in practice.” This is a pretty appalling thing to say, as he merrily daubs more whitewash on the sepulchres.

In Chapter 4, Lennox tries to take on the question of the origin of morality. The foregoing should give a taste of what to expect, and, yes, it’s a train wreck. Our New Atheists are unable to make moral statements, because to do so requires a theistic position as a base. You can’t derive an “ought” from an “is” (perfectly true), and since science can only deal with ises, it has nothing to say about oughts. Several people might agree with him on this, including me, but Lennox makes no effort to unpick exactly what morality itself is. Moreover, he completely ignores the vast reams of research into the neuroscience of morality, as well as the fact that behaviours that we might call “moral” are found in related species, such as chimps and gorillas. This lapse in scholarship is nothing less than astonishing, given that Richard Dawkins’ first major foray into the publishing world was “The Selfish Gene”, and deals with these issues extensively. But Lennox is not interested in finding stuff out – that might confuse his audience. Gotta stay on-message.

And on we go with what is essentially a crude and graceless fundamentalist Christian apologetic that does major injustice to the bible, philosophy, history and science alike. Lennox squirms to exonerate the god of the Old Testament from commanding genocide against the Canaanite tribes, loftily suggesting that the Israelites were oh so enlightened in their conduct of war, and that women and children were to be spared rapacious slaughter. Sadly, this is outright nonsense as the biblical descriptions of the conflicts of the Israelites (historically dubious though they are) clearly show divinely sanctioned massacre of women and children and even livestock. Evidently they deserved it because it is OK to kill the children of people who engage in child sacrifice.

The wheels really come off Lennox’s ramshackle wagon over the issue of justice. Atheism, you see, is deficient because it denies that injustices suffered in this life will be rectified in the next (obviously). He fails to recognise that under his own fundamentalist viewpoint, they’re not going to be corrected in the next life either – your two possibilities are heaven or hell, and the basis for going to one or the other is not the balance of justice/injustice you’ve ended up with in this life, but your acceptance or otherwise of this salvation business. So the injustices you suffer here are actually taken from you, assumed by god, and you as the wronged party are left with nothing whatsoever – not even the right to say that you personally have a claim. What kind of justice is that? Sadly (or perhaps not), our plucky author doesn’t even go there, so whether Jesus’ horrible death works as an atonement for this daylight robbery really doesn’t even come into the picture.

Do I need to go on? Unfortunately I do, because the next topic (after having a go at Hume’s classic work on miracles) is a risibly ad hoc defence of the alleged resurrection of Jesus after his crucifixion. For the record, I do think Jesus existed, that he was crucified, and that after his death a story arose suggesting that he had somehow “risen”. Lennox takes this, and attempts to cobble together a case that a resurrection actually happened. This is brave, given that we have precisely no eyewitness accounts of the resurrection event or the resurrected Christ (no, the vision of Saul Paulus on the road to Damascus does not count); the gospels, even when they come from the same source, are contradictory and were only written several decades after the alleged event by people who were not there. With the resurrection and other miracles, Lennox just can’t get his head around the point that what we have now in the 21st century CE, and what the writers of the New Testament had in the late 1st and early 2nd centuries, is not miracles, but stories of miracles. Stories of miracles are ubiquitous in every culture worldwide. Many Muslims believe that Mohammed made a mystical journey to Jerusalem one night on a flying human-headed horse. Enough said.

We are told by Lennox that the New Atheists have avoided trying to deal with the resurrection myth. Our Four Horsemen in general haven’t gone there in detail, but many other atheist and agnostic (and even theistic) authors have picked it over, revealing that our “modern” view of a physical resurrection is not supported by the biblical texts. If Lennox really wanted to deal with this issue, he could have had a crack at Bart Ehrman or Robert Price, but he doesn’t. Indeed, he might even suggest that his readers go back and check the biblical texts for themselves, but that would endanger his project, if Christians actually started reading the bible off-piste. So we’re left with a mess. It’s not that miracles and resurrections are physically impossible (who cares?) – it’s that they are not supported by evidence that they actually happened, rather than just being stories.

And that effectively sums up this entire book. Poorly researched, poorly argued, hopelessly naïve with regard to science and the philosophy of naturalism, arguably slanderous of atheists, and not even particularly biblically literate. If God is relying on cowpokes like Lennox to cover his back as he dashes across the street from the saloon to the sheriff’s station, he really is screwed. But times have arguably moved on from Dodge City. The work of the New Atheists is (I would suggest) largely done for Phase One. Arguing against – or for – the existence of the gods/“God”/whatever is pretty pointless, because none of this tackles our human situation. It is not, as Lennox moans, a problem of “sin” – it is a problem of the way we work as a primate species whose brain has evolved the smarts much faster than the rest of our nature has had a chance to catch up with.

We are, suggest authors such as Alain de Botton, left with something in our psychology which religions have over the millennia, perhaps unwittingly, learnt to deal with reasonably well. Vanilla Atheism may be unable to cope with this puzzle (even if atheism happens to be true in the factual sense), so once we’ve decided that there actually aren’t any gods (at least not of the type who are that interested in saving or damning us), where we go next should be to take the good things (if we can find them) from religion and apply them to secular life. I’m not sure that’s the best approach. Perhaps a more straightforward and subversive solution is for atheists to simply go back to church, reimagine all those “god” references as referring to concepts that we humans have invented, and seek to carve out a space for honest and assertive unbelief alongside our friends and neighbours who may hold different views. Maybe Atheism 2.0 and Christianity 2.0 can meet, not in a shootout, but in constructive dialogue, and the days of the tired old gunslingers will be gone.
Posted by Shane at 21:36 4 comments