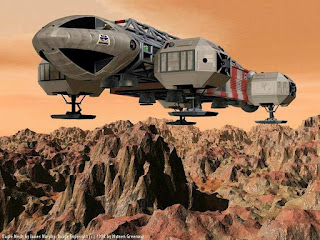 Why do the supervillains get to have all the fun? Here we are in 2012, mourning the passing of Neil Armstrong - a legend and a hero to so many of us - and it has been over 40 years since anyone has been on the Moon.

As I mentioned previously, I am a big fan of our ventures into space. I feel that our civilisation has so much to gain by pushing outwards beyond our little planet, out to the Universe at large. I don't just mean psychologically. I'm not just talking about feeding our curiosity for the sake of it (although that has its place). It's more than that. This is about advancing.

I'm a geneticist. I try to diagnose and manage (as best I can) a wide range of genetic disorders affecting adults and children. I try to use my medical skills and the best technology can offer in order to fulfil my duty. Despite being at the cutting edge, we are severely cash-strapped. It's difficult to fund the tests and treatments that our patients need. Although we deal with rare disorders, there are a lot of them. Up to 6% of people will be affected with a rare disorder - that's quite a large demographic - much larger than the slice of the pie given over to, say, severe mental health or multiple sclerosis.

Given this, you might think that I would want research on Large Hadron Colliders and space programmes to be diverted towards rare diseases research, but I don't. I do want more money for rare diseases research, but not at the expense of these other projects. I've already outlined why in The Medical Case For Mars, but there is a general point that I think needs to be made very clear.

It is this. Most of the major enabling advances that have delivered real tangible benefit to health care, and have driven health technology forward have not arisen in the health sector.

Isn't that crazy? But it's true. The science that underpinned MRI scanners would never have been developed if research funds had been diverted from pure physics towards brain disorders. The science behind next-generation DNA sequencers - the technology that is completely revolutionising my field of genetics right now - would never have arisen had it not been for "blue sky" research in the fields of nanofabrication, lasers, high resolution optics (itself based to a large extent on tech developed for satellites) and several other fields that have nothing to do with genetics. Even the structure of DNA was only solved almost 60 years ago by the application of X-ray diffraction techniques that originated in physics labs while the world was struggling to find cures for TB.

We also hear the argument that research should not take place into rare diseases until the more common diseases have been tackled first, but the proof of the pudding here is that rare diseases very often provide the key critical insights into human biology that allow common diseases to be treated better. The "rare" disorder of familial hypercholesterolaemia allowed us to make the breakthroughs that resulted in treatments for heart disease. Research into "rare" (1/10,000) Huntington's Disease is already having benefits to patients with Alzheimer's disease. Rare forms of cancer are providing clues that allow more common forms of cancer to be treated - these are examples within the health sector, but there are many examples from outside too.

The point I am trying to make here is that our civilisation does not and cannot advance piecemeal. What we gain in one area can often cross-fertilise other areas. If we cut back on research into (say) high energy physics and concentrate everything on finding a cure for (say) muscular dystrophy, we run a very real risk of missing a trick that would allow us to develop a new treatment or investigative modality that might dramatically improve the lot of those patients we are trying to benefit.

I'm going to say this again, in a slightly different way: The critical enabling insights that have allowed most major medical advances in the past century have arisen from studying other things than the diseases they have ultimately come to benefit.

There is a major important big stonking implication from this: SCIENCE MATTERS.

It is not enough to pay lip service to science. We MUST invest in science and in scientific thinking. We need our scientists to think outside the box and across disciplines. We need polymaths. We need jacks of all trades. We need specialists who talk to the jacks. We need entrepreneurs. We need risk-takers. We need a scientifically-literate populace and scientifically-literate politicians. The benefits of research are not just seen in the citation indices of publications, but in the overall raising of that tide of scientific advance that our civilisation floats on. We need geeks. We need the pen-protector white-socked engineers that Neil Armstrong represented, and that all of a sudden people are emerging from the sociology-laced woodwork to belatedly salute.

So, dear readers, in this spirit, I want YOU to help ME change Northern Ireland from the world's perception of a sectarian backwater into a world leader in science. We can do that by making our presence and our attitude known to our politicians. You CAN make a practical difference - click here to see the pledge to send a copy of Mark Henderson's book "The Geek Manifesto" to every MLA in the Northern Ireland Assembly. This is only one small thing - you can think of how YOU would like to make a difference.

Did I say "sectarian backwater"? That is a view the world has of us, but bloody hell - we produced Lord Kelvin. We produced Ernest Walton, John Stewart Bell, Professor Dame Jocelyn Bell Burnell, Frank Pantridge and many other scientists and doctors who have revolutionised the world. Not bad for a wee country of only 1.8 million. We should be up there in the top league, and it's time our politicians realised this.

Now, where's my bloody moonbase?
Posted by Shane at 21:46