http://newstalk.ie/player/podcasts/Futureproof/Highlights_from_Future_Proof_with_Jonathan_McCrea/25105/1/what_is_it_like_to_have_your_dna_tested
In which Kevin Mitchell, Tara O'Neill and I take Jonathan McCrea through the thorny process of genetic testing. This podcast was part of the FutureProof radio show on NewsTalk FM, recorded at the Science Gallery in Dublin on 19 June 2013.
We cover issues relating to genetic risk estimation, ancestry, genetic counselling and what our genes can really tell us about our health. Enjoy!
Posted by Shane at 20:25 0 comments

The genetics world is abuzz with the news that the Supreme Court of the United States has struck down Myriad Genetics's patent on the genes BRCA1 and BRCA2, mutations in which can confer a greatly increased risk of breast and ovarian cancer. This is Good News, because in aggressively defending these immoral and undeserved patents, Myriad were playing a game that was disingenuous at best, and frankly profiteering at worst.

The arguments used by Myriad in the long course of this battle, which has been back and forward in various levels of the quaint US legal system for years now, were seen to be without merit, although their sophistry is dazzling. One argument was that Myriad had put a lot of effort and money into finding the genes, and therefore this should be rewarded. The Court rightly decided that that was a silly argument, and the rights to intellectual property of any kind can't simply be granted because someone feels they should be rewarded for work - the product has to be patentable in the first place.

A related argument for gene patenting in general is that if patents are not granted, companies will have no incentive to fund research and development that might lead to better tests and treatments. It is not even remotely clear that this is the case; in fact, if anything, closing off access to genes is a sure-fire way to prevent the development of tests and treatments by stifling competition. Furthermore, it encourages a "land grab" for genes that means that researchers have to spend most of their time in courts rather than getting on with the important job of using this scientific knowledge, which is the shared heritage of humanity, to make life better for people. There are few if any examples of gene patents actually leading to patient benefit. Get your intellectual property by legitimate means, people.

The Court did, however, reveal in its ruling that the judges really didn't have the first clue about molecular biology. Even after careful, and one would hope open-minded, consideration of the background and the evidence in the case, the ruling contains a number of howlers and bizarre misuses of terminology. For one thing, it suggests that while the raw DNA sequence is not patentable, cDNA (complementary - not "composite", you wallies - DNA made from the edited RNA transcript - hey, look it up - I don't want to make this blog too long) could be patentable. This is illogical, as firstly cDNA was not invented by Myriad, and the sequence is the issue, not the physical carrier, and they've already said the sequence can't be patented. Silly silly silly. Besides, you don't need cDNA to test a gene these days. It's 2013, not 1993. It gives you some indication of how thick the previous lower judges who made the initial rulings must have been.

Anyway, in case you were wondering whether US investors were sensible, you can dismiss that thought - after the ruling, shares in Myriad actually rose, presumably because a company that had survived on spin and misrepresentation were able to spin and misrepresent their defeat and make it look like a victory. Some investors are likely to lose quite a bit of money, and slap it up them.

Justice has been done. It would have been nice if it had been done with a little more finesse.

[Link to WSJ rendering of judgement]

So here it is! I have hitched a Top-Lit Up-Draught (TLUD) stove design to an old barbecue, allowing cooking on gas on one side and char barbecue on the other. It works extraordinarily well - boils water in minutes. 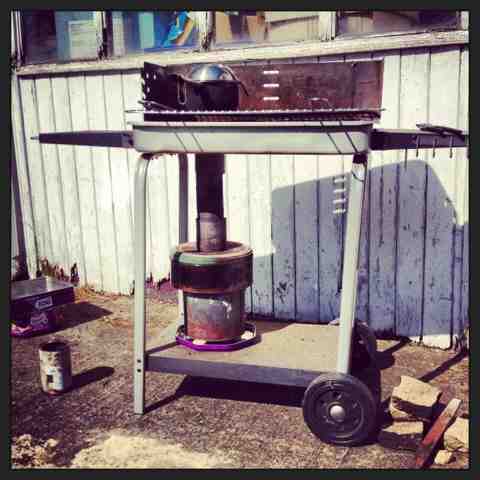