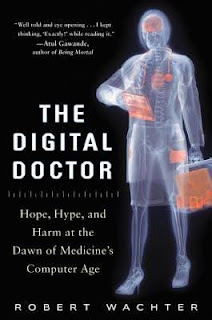 I'm currently reading Dr Bob Wachter's fantastic book "The Digital Doctor" - a hard-hitting and insightful analysis into the whole field of the computerisation of medicine. Medicine has undergone a profound transformation in the past decades, and computerisation was, in many circles, felt to be the Next Big Thing that would deliver better care at lower cost for a greater number of people. The impact of digital in other industries - and indeed in our social lives - was felt to be translatable across to the messy world of Medicine, and we'd swiftly be on our way to a new and safer healthcare world. Billions were spent on this promise, and the big IT contractors gleefully piled in to address the issue.

And of course the reality was that Healthcare is much more complex than they imagined. Rather than this being a *technical* challenge, that could be sorted by wheeling in the appropriate tech and software, we are faced with an *adaptive* challenge, where the problem lies in the people, processes and indeed culture of the healthcare world. If we want to use IT to help us build better healthcare, we have to start with what is going on at the coal face. It's not enough (indeed it's positively fatal) to engage the CEOs and Medical Directors of healthcare delivery organisations (e.g. Trusts in the UK), and expect adoption and improvement to automatically follow.

I'm still something of a newbie at this, despite blogging about various aspects of our Northern Ireland journey over the past few months (in between digressions into biking and virtual reality). However at a recent meeting to discuss our plans for a unified Electronic Health Record for Northern Ireland (#EHR4NI), I heard a senior decision-maker (not a clinician) actually state that the road to clinical engagement would be to speak to the Chief Executives and Medical Directors of the Trusts; this would be how we would deliver the necessary buy-in from the doctors, nurses, AHPs and others that would make the process a success.

The good news is that NI has appointed Chief Clinical Information Officers for each hospital Trust, to join established colleagues in the Public Health Agency, the Health and Social Care Board and the NI Ambulance Service. There are five HSC Trusts; Belfast is one, and I have the pleasure of being the CCIO there. However, I and my colleagues also have busy clinical jobs also, and this clearly limits what we can actually deliver.

So what do we need to deliver? The "Clinical Engagement Piece" is one element, but exactly what are we asking our clinical colleagues to engage with? One possibility is that NI will go to market to purchase an all-in-one monolithic computer system on the basis of uniting primary care, community services and hospital based care. I have written about this Standard Model before, and it's one that I have a number of deep concerns about. The principal concern is that if we presuppose that we're looking for a computer system, we'll turn this into an IT project rather than a programme to improve the quality of clinical care. This sort of thing has been done plenty of times worldwide, and the common element seems to be that it generally doesn't work - sometimes spectacularly. The systems are beset by problems, the re-design of processes becomes an exercise in fitting the clinical workflow to the software, rather than reimagining both to actually do a better job. [See this 2-part article from Heather Leslie for some excellent learning.]

Another model might be to continue to purchase multiple "Best of Breed" solutions - software written by subject experts, and tailored as best as possible to the clinical process that we're trying to improve. Whether many of the systems we use would qualify as even mediocre, never mind Best of Breed, is debatable. And we're locked into contracts that are difficult to escape from, while our patients' data remains fossilised in systems that are reluctant to give it up again, much less to interoperate across the silos they were engineered to sit atop. It's pretty clear that this way lies madness; patient care is not markedly improved, but we end up spending a whole lot of money anyway, and digging ourselves into an even deeper hole.

So let's see how we resolve this problem. It turns out that farming these important issues out to IT professionals and consultants (not the clinical type!) is a critical error because these people cannot understand the clinical world. How can they? They're not trained. Nor can we just hand over to clinicians, because without the necessary background in quality improvement, change management and multidisciplinary vision, we just end up consolidating irrational variation (based often on whim) and making decisions that end up reinforcing silos, and indeed multiplying them. We need to find ways to get all these people - clinical, IT, managerial, and (most crucially) the patients - collaborating.

I'm still working my way through Bob's book (reading and re-reading each chapter - it's worth it!), but it's reinforcing some thoughts that I and my CCIO colleagues seem to be rapidly coalescing around. One is that we need to get the Data Interoperability issue highlighted (Bob calls it "baked in") from the outset. I'm going to suggest that we very explicitly and at an early stage in the process - now's good - state that we are NOT going to go down the route of a single electronic system to replace all the systems and functions of a healthcare IT infrastructure. Instead, we must create an ecosystem where the patients' data forms the core resource, and multiple developers and vendors can work on refining the interfaces that serve the clinical, management and analytical needs of the health service.

In effect, this seems to imply (and I am continuing my research, so this represents my current view, which may change according to new evidence and arguments) that we address the data first, then progressively migrate the apps to the data, instead of the old ways of migrating the data to the apps. We need evolution, not revolution. Plenty of Positive Pops rather than Big Bang.

What will this allow us to do? Firstly, it should encourage standardisation around best clinical practice - since we will be collecting the same data, we can assess variation, and analyse processes to see how best we can remap them to the most solid evidence base. Secondly, it will encourage innovation - agile software development will make it easier to quickly adapt interfaces to new clinical developments, without the need to change an entire system. Thirdly (and as a result of these), it will allow frontline staff and patients to get much more involved in refinement of the apps and systems that are being used. Fourthly, since the apps will be using the same data according to agreed definitions, data can be reused across clinical scenarios, reducing duplication, waste and errors.

Now these are very logical benefits, but will they actually pan out in practice? That is the million dollar question (or in the case of the UK's largely-failed National Programme for IT, 16 BILLION dollar question). There is good reason for scepticism that all the advantages that come from magical thinking will actually appear in the short term. They call this the "Productivity Paradox" - computerisation should help, but it usually requires a long time before it actually delivers, if at all. Our budgetary decision-makers in NI need to be aware of this - if we are going to go digital, it will cost money up front that may take years to deliver a return.

But let me get back to the main point - our prime objective here is NOT to computerise Health & Social Care - it is to improve the care of our patients. If we keep that principle front and centre, and build in the absolute requirements for an open and interoperable data platform supporting multiple partners, then we can do something pretty special here.  One model that I am very keen on is #OpenEHR, and we are actively exploring what we can do with this approach (and I think we should be doing more).

Is Northern Ireland up for this challenge? Well, before we head too far up this loanen, (old Ulster Scots term - look it up), I suggest we need to invest a good deal more resource (still cheap!) in freeing up some more of the time of the young (or at least not too senior) doctors, nurses, AHPs etc who will explore these waters and energise their clinical teams. I feel we CCIOs need significantly more time in our job plans to be CCIOs (one day a week? seriously?!), and we need clinical colleagues funded within our organisations who will join clinical informatics groups. We also need the CCIO role beefed up in terms of where it sits in the organisational hierarchy. We need specific specialty and patient focus groups that are structured around actual delivery, rather than merely producing wordy documents. We need a workable governance framework for the data, and we need money to do the groundwork and to experiment with various implementation models. This has to involve links with academia and IT industrial partners. We need to take risks. We need to be prepared for multiple Plan/Do/Study/Act cycles, supported by rapid innovation and rigorous data analysis. And we need to be ready to put our backsides on the line.

We have already had remarkable success with the Northern Ireland Electronic Care Record (NIECR) - that rare beast of an IT system that clinicians love, and that has had a dramatic effect on the practical delivery of patient care. Most hospital doctors now use NIECR as their first port of call when trying to find clinical information (letters, lab reports, radiology, medications) on patients, and it makes a real difference. It has shown us what is possible, and now we have to take things to the next level.

It's going to be a lot of work, but by the time Bob writes the second edition of "The Digital Doctor" (or maybe by the third - let's be realistic!), I want Northern Ireland to be one of his shining examples of what is possible when a country gets things right. So let's make sure we do that, rather than ending up as yet another cautionary tale of what happens when you try to turn a quality improvement process into a large scale IT project.
Posted by Shane at 21:33 1 comments

We went cycling in Slovenia. The event was the Single Speed European Championships - mountain bikes specifically modded to have only one gear setting. It's all the rage among the kids these days, and certainly imposes an interesting discipline on one's ride.

Anyway, Slovenia is utterly beautiful. And of course I took my phone and captured some fantastic immersive 360 degree virtual reality images of the scenery. You'll really like this one, from the heights of the idyllic Soca Valley near the fantastic little town of Kobarid.

Click here to download the vr.jpg file. Put it on your Android phone and view in the Google CardboardCamera app.

Oh, and in the race I came 4th. Along with about 300 other people. There is no 5th in this race. In the short video below you'll get a flavour of events, and you'll see my brother Rick, and friends Hugh and Davy - as well as a load of new friends. And stuff.