I will join friends from the UK and Middle East to raise money for the Nazareth Hospital Paediatric Department by cycling round the north of Israel. This post contains some information about me and my ride – feel free to share and to get in touch. Most important of all, I would love you to donate to our appeal – your support is greatly appreciated, and will help us achieve our dream of a modernised Paeds Unit in this amazing little city!

I’m Dr Shane McKee, a consultant in Genetic Medicine at Belfast City Hospital. My job involves the diagnosis and management of children and adults with rare genetic disorders. Some of the work is very hi-tech, involving the latest DNA techniques and computational analysis, but the most satisfying bit of being a Genetics doctor comes down to listening to patients and their families, putting together the pieces of the puzzle, and applying that knowledge to make life better. Children are disproportionately affected by rare genetic disorders, and when kids are ill, they need the best care, with their families around them.


What is the Nazareth Hospital?

Back in 1861 a young Armenian doctor named Dr P.K. Vartan from Constantinople, capital of the Ottoman Empire, arrived in the Palestinian town of Nazareth. He established the only clinic between Beirut and Jerusalem, catering for people from all around the Galilee and beyond. Although well known as the boyhood home of Jesus, Nazareth in the 1860s was a fairly small town. Over the decades, and through considerable turmoil in the region, the hospital expanded and modernised as best it could, supported by the Edinburgh Medical Missionary Society, the organisation that had originally trained Dr Vartan and which had sent him to Palestine.

Today the Nazareth Hospital (known locally as the English Hospital as well as the Scottish Hospital) is a modern facility, acting as the District General Hospital for the region of the Galilee. Although established by a Christian charity, and drawing many of its staff from the local Christian Arab population, the Hospital also has many Muslim and Jewish staff (and others), and treats patients of all backgrounds. It is a beacon for unity and peace in a region that has been marred by conflict for many years. However, several areas of the hospital are in serious need of upgrading, particularly the Paediatric Department, and that is the focus of the latest appeal by the Nazareth Trust.


What is my connection with Nazareth? 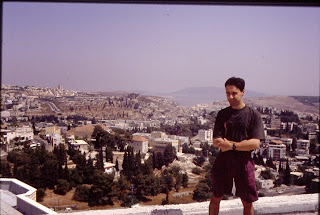 During our training as medical students, we were encouraged to travel from Northern Ireland to another country, somewhere unfamiliar, to see how medicine is practiced in conditions very different to back in Belfast. This was in 1993; I chose Nazareth, since a doctor from my home town of Dungannon, Dr Stephen Crooks, was working out there. I have always been fascinated by the Middle East, and this was an excellent opportunity to get to know a small part of it at first hand. I spent six weeks training in Nazareth itself, and fell in love with this little city and its wonderful inhabitants. Although I was only there for a short time, it now feels like a second home to me.

The local Arab Israeli population are warm generous people with a great sense of humour. They graciously welcomed me into their town and their homes, and that experience has shaped my entire medical career as well as my outlook on the world. As I met these people in the Emergency Department, the wards, the operating theatres, the clinics and maternity unit, I learnt a great deal about the practice of medicine, about cross-cultural communication, and about myself. I am forever in their debt. When I returned to Northern Ireland after my elective was over, I longed to return.

In 2009 I joined a sponsored bike ride along the Jordan Valley, from the Dead Sea up to Nazareth. About twenty of us cycled 250 miles through Jordanian and Israeli territory, seeing the sights and feeling the burn of climbing over 1500 metres up from the valley floor to the Jordanian plateau. The proceeds of our ride went to maintaining and developing the hospital, including the new operating theatres which were a massive improvement on the very old-fashioned theatres I worked in as a student. And of course I made a lot of new friends, all of whom share my love of Nazareth.

The Nazareth Hospital celebrated its 150th Anniversary with a conference in 2012 – this was a chance to catch up with old friends and to see how things have changed. Many of the kids whom I met on my first trip now have children of their own, and the Paediatric Unit does amazing work with very limited resources.


What will I be doing?

From 6-10 November 2016 I am joining another intrepid group of cyclists from the UK and The Galilee (and possibly a few from elsewhere). We will start in Haifa, and over the next five days we will cycle over 200 miles around Northern Israel, before crossing the Sea of Galilee by boat, and then making our way up through the hills to Nazareth Hospital. There are some challenging climbs, scary descents and bumpy tracks, as well as a couple of on-foot sections, and we’ll be overnighting in local kibbutzim at each of our stops. It won’t be easy, but it will be unforgettable (there may still be a few spaces available if anyone wants to join us!). Our objective is to raise as much money as possible to help refurbish the Paediatric Unit in the Hospital.

How can people help?

I have set a fund-raising goal of £3000, but I hope to raise as much as I can. I have set up a Justgiving web page at http://justgiving.com/shanenaz2016 . Using Justgiving significantly reduces the administration costs for the charity (The Nazareth Trust) meaning that more money goes directly to the project. I am really grateful for any donations, no matter how small (or how big!) - they all go to making the Paediatric Unit fit for the kids of the 21st Century, and hopefully building peace for the next generation. I am of course also grateful for any publicity on FaceBook, Twitter, Instagram, media or even good old-fashioned sharing – anything to help raise as much as possible for the Hospital, and to raise awareness what we are trying to do for the children of Nazareth.
Nazareth is a popular quick destination for tourists visiting Israel, but most people pass through very quickly on a whistle-stop tour. I would strongly recommend staying a bit longer, perhaps in one of the fantastic local guest houses in the Old City, exploring the town, and talking to the modern Nazarenes. It’s a complex, fascinating, full-on experience – oh, and the Palestinian food is amazing. Nazareth is famous for the best cooking in Israel, if not the entire Middle East.