Brexit and the Northern Ireland Problem 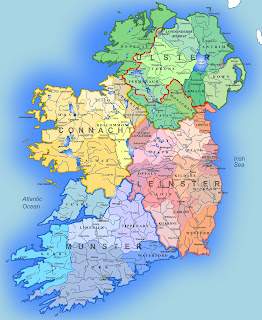 Brexit is a mistake, in my view. I don't feel we should be doing it; I think it was mis-sold, and I think the government of Theresa May is damaging the UK by proceeding in such an inept manner in pursuing it.

But we keep being told that it is "the Will of the People" (although the WotP has not been validated, given that we now know that in the referendum people were sold a pup). So let's assume that it is indeed the WotP and we are indeed heading for Brexit.

The problem of the Irish border has been a big one in the negotiations so far. How do we protect that hard-won open border, that effectively makes all of Ireland open for travel and trade, and has undoubtedly brought much in the way of peace and prosperity to both sides? The solutions proposed so far by the Hard-Brexit government or by its lackeys (or is it the other way round?) in the DUP are complex, unwieldy, and quite simply the product of Pollyanna fantasies.

We can't manage customs and travel electronically; people free to move into Southern Ireland legally within the EU will be able to seamlessly travel to Northern Ireland and thence to Great Britain. The same for goods and services - the only way anything will be detected or stopped would be if someone were to actively investigate at the end point. This would presumably lead to the good people of GB having to carry identity cards around with them at all times. It would mean that any goods in GB (manufactured, agricultural, whatever) would have to have full certified traceability to the point of origin at all times. I'm fully happy to admit that I am not an expert on such matters, but I haven't seen anything that gives me much hope that the above isn't inevitable. Maybe I am wrong, but I have another solution.

Northern Ireland should remain in both the UK *and* the Single Market. Think about the advantages this would bring - Northern Ireland would be positioned as the UK's trading post with the EU, bringing spectacular economic advantages. Goods and services produced in NI would be able to trade tariff-free with both UK and EU markets, and citizens of NI would likewise have free travel within both areas. Similarly, EU citizens would have free travel between EU and NI, so as far as we are concerned, rights of movement and trade would continue pretty much as before. This would also have the advantage of considerably softening Brexit for the rest of the UK, as trading and financial businesses which relocate to NI would be able to keep a stable foot in both camps. This would put inward investment through the roof.

For people on the island of Ireland, a series of enhanced rights to residency, healthcare and government services on both sides of the border could be established fairly easily, maintaining the current exchange, eliminating the threat of a hard border, and promoting peace, stability, co-operation and economic prosperity. As more trade flows through NI, the links with UK will actually be strengthened, not just for Northern Ireland, but for the whole island. This will cement peace, and perhaps paradoxically, improve overall relations with Ireland and indeed the EU.

Given that relations between our (sadly inept) UK negotiating team and the EU negotiators have been very poor, this strikes me as a very sensible strategy to make Brexit (assuming it has to happen) an orderly process with a stable outcome that avoids many of the disbenefits that have been identified so far, both before and after the referendum.

I don't have the skills to go into the constitutional details of such a proposal - I'm sure there are complications that might have to be worked out with the WTO, and the DUP will presumably throw a fit at the prospect of customs and passport checks between GB and NI, but these can be worked out, and it seems a very small (and patriotic) price to pay for strengthening ties between NI and GB, Ireland and GB, and GB and the EU - all in a time when the atmosphere is frostier than it should be.

Like many people in NI, I love this place. I have a British and an Irish passport. I am a proud European (while still recognising that there are issues to be sorted). Northern Ireland voted *against* Brexit, and since the people *here* have spoken (and acknowledging that this was a UK-wide referendum), it seems reasonable to listen to them. So I propose this, not just as a lesser-of-a-bunch-of-evils approach, but as a positive suggestion to turn the sow's ear of Brexit into a silk purse for Northern Ireland, Ireland as a whole, GB and Europe.

Sure, it will require inventive thinking and some unprecedented arrangements, but we're in that territory anyway. Let's do this.


And in the meantime, please help us raise money for a CT scanner for the new Nazareth Stroke Unit http://justgiving.com/shanenaz
Posted by Shane at 09:46