What your Sunday School teacher didn't tell you about Nazareth 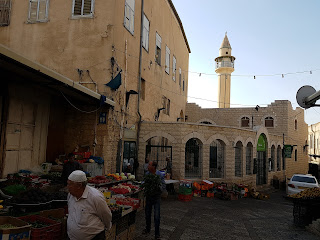 When you were at Sunday School you most likely were fed a picture of "The Holy Land" that was complete camel shit. It's not really your fault, and it's not the fault of those who taught you. But over the centuries, we in the damp cold western reaches of Europe have cultivated a frankly silly version of what life was like in first century Palestine, and what it's like for the descendants of Jesus's friends and family right now.

As an example, I recall hearing a visiting preacher to our church railing against the evils of alcohol, and how when Jesus turned the water into wine, this was because water was far too contaminated with camel excrement "in those days" in the virtual desert of The Galilee. Besides, what we call "wine" was, in ancient times, pretty much non-alcoholic. So Jesus essentially turned the (presumably contaminated) water into Shloer - a much more appropriate tipple for a Presbyterian wedding. I imagine he turned the baclava into butterfly buns and caramel square tray bakes while he was at it. Mary would have been quite at home in the PTA.

Even though I was only in my teens then, I was informed enough to know that this visiting preacher (whom everyone seemed to regard as being very "godly" and "biblical" and such a wonderful teacher) was talking out of his backside, and if he was wrong about that, there was a fair chance he was wrong about a lot of other things too. And if he was wrong, maybe our regular preacher was wrong, and maybe all of them were wrong, and maybe we all needed to be a bit more sceptical of what we read in the Scripture Union Bible Study guides and even in the Bible itself.

When you start thinking that way, you start noticing things. Interesting things. You start to see the world in a new light - one that shows gradation of colour and brightness, rather than stark black and white. One that is infinitely more interesting than our preconceptions, and very frequently at odds with them. And thus we come back to Nazareth.

Nazareth is a large, mainly Palestinian Israeli town in the Galilee region. When you say "Galilee", many people here think of the vast Sea of Galilee and have a vague idea that it's an enormous inland lake. Well, yes, it's a biggish lake, but it's only about half the size of Lough Neagh in Northern Ireland. It's also known as Lake Kinneret, and there are a few other names for it too. It lies well below sea level, and drains via the Jordan river, down into the Dead Sea well to the south. However "Galilee" refers to that whole region of northern Israel-Palestine with the Lebanon border to the north, the Mediterranean Sea to the west, the Carmel range to the south and west, and the Jordan river and Lake Kinneret to the east. It's not that big, really - about the size of a typical Irish county. The Galilee is not a desert - that's one thing our fire-and-brimstone preacher got wrong. It is a highly fertile place - yes, dry and dusty by Irish standards, but very productive and very beautiful. In many areas it's positively lush. It's hot in the summer - much like Spain - and in springtime it is transformed into a verdant landscape bursting with flowers. The bridegroom of Cana (close to Nazareth) would have had no problem finding pure clear drinking water.

Palestinian farmers have tended this land from time immemorial. The people who live here are descendants of the many civilisations who have washed over this country. They are the descendants of the Canaanites, who later became the Israelites, who later became Jews, then Christians, then Muslims, but it's nowhere near as simple as that. The truth is that genes don't care about your religion. We are all mongrels, and you don't need to go back too many generations in any of us before you hit some surprises. Surprises? Inevitabilities. With full outbreeding, if you were to go back 10 generations - less than 300 years - you would have 1024 ancestors. In 1000 years you would have over a billion. Such complete outbreeding is of course never going to happen - our family trees are really networks, and we just happen to be nodes in that network. So the people of the Galilee have been there since prehistory, with some people moving in, some moving out. But of all the peoples of the world, it is these people, mainly Muslim and Christian, who are the closest descendants of the people of Jesus's time, and closest genetic relatives of Jesus himself. Our preacher didn't know that either, and probably didn't care.

Nazareth's modern population is mostly Muslim, with a sizeable Palestinian Christian minority, and a mainly Jewish community in nearby Nazareth Illit ("Upper Nazareth" - initially a settlement intended to rival and displace Nazareth-proper, but which is increasingly becoming incorporated within Nazareth itself). It's a messy, noisy, bustling town which has grown up over the years with minimal planning, so a lot of development is higgledy-piggledy perched on the various hills and contours of the area. Its size increased considerably in the mid-20th Century, principally due to taking in people forcibly displaced by the Israeli army from their homes across Palestine, so now every area (almost) of the original valley has been built up.

One notable exception to this development is the little valley just below the Nazareth Hospital. This land is owned by the Nazareth Trust, from the time it was originally purchased in the early 1900s. It wasn't suitable for hospital buildings, so lay unused for many years. However, the Nazareth Trust have now developed into the Nazareth Village - a folk park that seeks to demonstrate what life was like for the Nazareth community back in the first century CE. They have farm buildings and a synagogue, houses and workshops, constructed from the best archaeological information we have, and volunteers take the role of Nazareth villagers, demonstrating what life was like to the thousands of pilgrims and tourists who visit each year. I can strongly recommend it, even though I have some doubts about the nativity-play costumery. It's really quite delightful - a jewel.

Although there are occasional frictions as you might expect between any religious groups, the Christians and the Muslims in general get on reasonably well in Nazareth. In the olden days the churches and the main mosque were connected by tunnels running under the Old City, which enabled them to move supplies and mount a defence when the town came under attack from bandits (which it frequently did in the centuries before the 19th). The people are incredibly friendly, and have a fantastic sense of humour. I imagine this has been the case for millennia - this is a town that has seen it all, and sometimes when you've seen it all, all you can do is laugh.

The food is legendary - said to be the best in Israel. Many of the top chefs in Tel Aviv and Jerusalem are either Nazarene or trained in Nazareth. It is one thing that they take very seriously, and I have had many utterly delicious (and enormous) meals there.

Nazareth EMMS Hospital (the "English Hospital", which is ironic, since EMMS stands for Edinburgh Medical Missionary Society) is the biggest hospital in the area, and the largest employer in Nazareth itself. There are two smaller hospitals, one Italian and one French. The EMMS Hospital is now run by the Nazareth Trust, with local administration and staff, rather than the expatriates who were a mainstay for many years (including when I was there as a medical student in 1993). It's actually the oldest hospital in Israel, with a history stretching back over 150 years - that's a long story, but a fascinating one in its own right.

Mount Precipice is a large hill to the south of Nazareth, overlooking the Jezreel Valley. Traditionally this is where the Nazarenes decided they would chuck Jesus off a cliff, but that's almost certainly not the case. A large cave in the cliff below Mt Precipice contains many layers of bones and archaeological remains - several Neanderthal burials were found here, so we know that this area has seen a lot more than just historic civilisations passing through.

So if you do find yourself in Nazareth, please stay a little longer and explore the areas away from the suq (market) and the huge Basilica of the Anunciation. Explore the streets, try the food, smoke a narghile, strike up a conversation with some locals. When Jesus met Nathanael, he was asked "Can anything good come out of Nazareth?" Perhaps that preacher had the same attitude. But once you let Nazareth work its way under your skin, you'll realise that there is a lot more here than Sunday School fairy tales.
Posted by Shane at 18:45