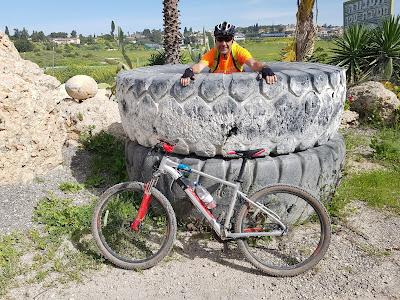 As a medical student I was fortunate to be able to spend a summer working in a rather remarkable little hospital in the north of Israel. Nazareth EMMS Hospital was founded in Ottoman Palestine by a young Scottish-trained Armenian doctor from Constantinople back in 1861. It has witnessed a great deal of turmoil and change in the region over its history. My student elective in 1993 made a deep impression on me, and I developed a strong affection for the place and especially the people. Nazareth is the largest Arab town in Israel; the majority of the population is Muslim, but there is a sizeable Christian minority with roots going right back to the time of Jesus. Although I’m not religious, every time I’m in Nazareth I feel a buzz about this town that intrigues and delights me (as well as a lot that needs to be fixed), and I have made many lifelong friends among the Nazarenes. 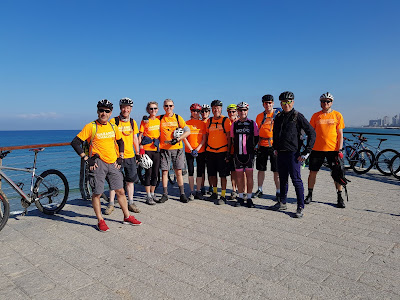 In March 2019 I joined a group of other riders on what was my fourth bike ride to raise money for the hospital. The Maternity Unit is in serious need of renovation, and twelve of us saddled up in Jaffa on the coast for the 300km ride through Israel and the West Bank to Nazareth. Over the five days of the ride we made over 5000 metres in total elevation – that’s half the height of Mt Everest – with a fair bit of downhill also. Jerusalem, our highest point, sits at about 800m above sea level, while Jericho, the lowest city on Earth, is about 200m below. Israel and Palestine can be hilly in places, but the scenery, especially in the Spring, is breathtaking, and biking is the perfect way to meet the locals and experience the surroundings. 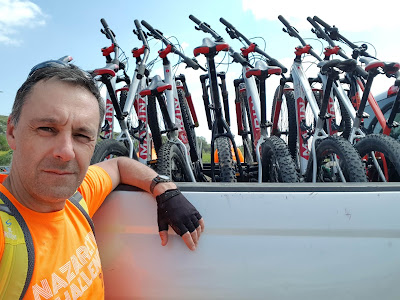 Of course we didn’t take a direct route – on the first day we travelled from Tel Aviv-Jaffa to Neve Shalom, a lovely joint Arab-Jewish community focused on peace and reconciliation. The second day took us up a tough climb to the astonishing city of Jerusalem, and we had a brief chance at the end of an exhausting day to explore the Old City. From Jerusalem we biked through the traffic to Bethlehem, taking in the Church of the Nativity and getting our photos taken with a large group of Japanese pilgrims who seemed to think we were somewhat crazy. Perhaps they were right. The ride from Bethlehem to Jericho was largely down hill; we had to work for it – almost 800m of climb to descend 1000m – but the poppy-speckled Judean Desert had some spectacularly rocky and adrenaline-inducing tracks waiting for us, and we made the most of them. 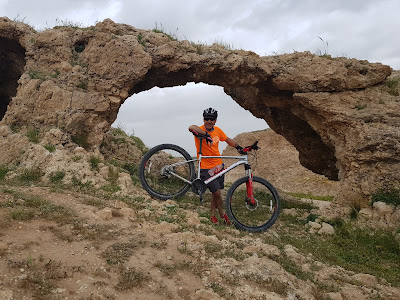 Leaving Jericho the next morning, we headed up the hills around Nablus, and the freakish rain that had ended the last few years’ drought, raising the Sea of Galilee a full 3 metres, had turned those hills a Celtic green, and still had enough in reserve to give us a good soaking by the time we crossed the Green Line back into Israel. We were well ready for a rest by the time we reached our overnight stop at Nir David. Our fifth and final day started off sunny, but we hit a major snag when we became stuck solid in the red mud in the fields – it clogged our wheels and gears like quick-setting concrete. This forced us to back up and take the main road to Daburiyah at the foot of Mount Tabor, then off-road through the Churchill forest up to Nazareth itself. 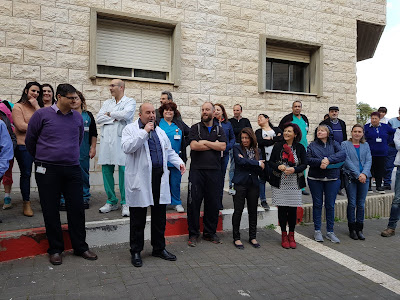 The welcome at Nazareth was an incredible experience – bagpipes, singing and cheering as the cyclists, along with the walkers from the Jesus Trail hike, arrived through the gates of the Hospital. And this was what it was all for – all of us have our different stories as to how we fell in love with Nazareth, but we know that quite aside from the exhilarating experience of our ride to get to this place, there is something important going on here. This hospital is a crucial part of this Middle-Eastern community, caught in the cross-hairs of one of the world’s most perplexing political problems. There are relationships being formed here, healthcare being provided, and – of course – babies being delivered. Thanks to the help of all our supporters, those babies will have a better start in life, and the chance to grow and serve their community, to form relationships, and build the sort of future that everyone – Christian, Muslim, Jew, Druze or Other – deserves. 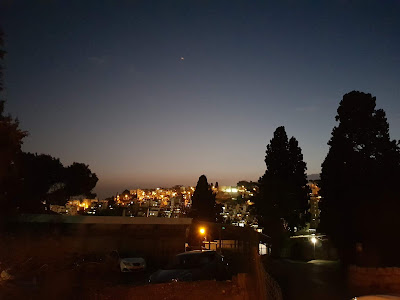 To those of you who donated to our appeal, thank you so much. We loved representing you on this ride, and I really hope you get the chance to visit Nazareth to see at first hand what your donations have achieved. Most of all, I hope you meet the people whom you’ve helped, and maybe you’ll fall in love with Nazareth too.

If you would still like to donate (please do!), click here: http://bit.ly/nazberrypi
Posted by Shane at 20:23 20 comments

Nazareth Trust - looking to the future

This is a great video about the Nazareth Trust, well worth watching to the very end.
Things have changed a *lot* since my first time there as a medical student in 1993, and although I don't believe in God, I do believe that this is a special place that's doing an incredible amount of good, and is a model for how we should be fixing our world. This is why I love going back on the bike, and why I'm so grateful for all of you who have supported us over the years, and continue to do so. Because it's *working*. Christian, Muslim, Jew, Druze, Atheist - it doesn't matter. So watch this video, chuck us some loot for the bike ride, and follow our journey on the Three Seas Challenge. And if you are ever fortunate enough to visit Israel-Palestine, make some extra time to explore this incredible little city.
Posted by Shane at 09:31 17 comments